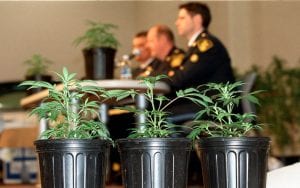 Recently, the Drug Enforcement Agency has been in the news for several different reasons, including the statement made by the DEA’s Chief Chuck Rosenberg in which he calls medical marijuana a joke. A new report, titled The 2015 National Drug Threat Assessment Summary, has been released in which law enforcement seems to have a different opinion on the subject.

The report took a sample of 1,100 law enforcements officers and asked them what they thought the nation’s biggest drug threat is. This is the fifth year in a row the DEA reports marijuana is at the bottom of the list, even though 6 percent of the sample still reports it to be the biggest drug threat. The latest poll from Gallup seems to coincide with this report, showing that 58 percent of Americans now support the legalization of marijuana.

The DEA is still stuck on outdated and often inaccurate facts about marijuana. This was seen on recent news, when the DEA took to their own interpretation of a new amendment and continued to use federal money to fund raids of legitimate marijuana businesses in legal states. The DEA reports marijuana legalization and decriminalization “will allow small-scale domestic criminal organizations to cultivate and traffic marijuana with more freedom than in the past.” Unfortunately, when they say “criminal,” they are referring to legitimate, licensed and tax paying medical and recreational marijuana businesses.